ADGS Team with the Ambassador of Argentina in Qatar, H.E Rossana Surballe 2017

HADUN/BLUP (Half Duplex Negotiation) is a protocol that has been designed and tested by ADGS to maintain long range (altitude 30km+ and distance 200km+) radio data transmission system for the ICTE rockets program, satellites, stratospheric balloons and drones. It is based on the NASA "DeepSpace protocol". The DeepSpace protocol allows interplanetary data transfer. This specific protocol is lossless.

HADUN/BLUP is a lossless protocol built on the WIFI physical layer with in-house ADGS protocols. A packet of data sent from one end of the link is guaranteed to arrive at the other end. The complete replacement of the TCP/IP stack suppresses network acknowledgements. The idea behind the use of regular WiFi physical layer is to allow the use of regular cheap commercial hardware, with proper software modifications made by ADGS.

A regular WIFI protocol will literally freeze a connection if it registers a simple 1% packet loss. The WIFI protocol timeout for packets does not allow distances greater than 100m and the acknowldgment of successive packets transfer makes the speed sharply decreases as the link distance increases. This is why WiFi is not designed to deal with distance, interferences and obstacles. HADUN/BLUP is remarkably resilient in case of interferences and packet loss since it gracefully degrades the connection speed: with the same 1% packet loss, HADUN/BLUP will maintain 99% of its original speed. In the extreme case of 95% of the signal is lost, then the HADUN/BLUP connection speed will be downgraded to 5% of the original speed, but the link will still be reliable.

In other words, HADUN/BLUP is able to trade speed against reliability: with a strongly degraded signal (range, interferences…) a lower speed will keep the link up. This caracteristic is requested in case of sensitive communications (drone, military....). The trading algorithm is robust against blackouts and high rates of loss.

With low cost hardware, the range can easily reach 300 kilometers and probably more, the theorical limit on earth is due to the radio horizon. HADUN/BLUP on WIFI physical layer allows to maximize the capacity of a one-way channel, minimizing the consumption of amplification

It is important to specify that the range implies the two antennas remain in sight (for instance, the WIFI frequencies do not allow two ships to communicate below the radio horizon). The radio horizon is the locus of points at which direct rays from an antenna are tangential to the surface of the Earth. If the Earth was a perfect sphere and there was no atmosphere, the radio horizon would be a circle. As an example, the service range of a station at an altitude of 1500m with respect to receivers at sea level would be 160km.

Transmitted data can be strongly protected using regular computer encryption methodology. For instance, using a software like WebDNA, data can be protected using military-grade encryption.
HADUN/BLUP is based on the DeepSpace Transport Protocol described by Giorgos Papastergiou, Ioannis Psaras, Vassilis Tsaoussidis in "DeepSpace Transport Protocol: A Novel Transport Scheme for Space DTNs"
HADUN/BLUP uses a full selective confirmation which avoids waste of channel capacity on useless retransmissions. No congestion control is required nor any speculative retransmission necessary: the communication is an end-to-end link and there is no network congestion. This further allows better use of the channel capacity. The network card is used as a pure modulatory, avoiding the use of the 802.11 data link layer but taking advantage of the physical layer.
During experimentation and with regular WIFI hardware, ADGS has been able to maintain a solid 2mbps link transfer speed at a distance of 60 kilometers with a stratospheric balloon and battery-powered commercial WIFI hardware.

Beside communication protocols, ADGS has developed the stabilization and atmospheric re-entry of the ICTE rockets program "Pampa Cielo".
PAMPA CIELO is a space technology development program aimed at education, training and the preparation of highly motivated human groups for the installation of a highly competitive national aerospace industry.
It was designed to be applied within the framework of the R&D unit of Technological Innovation Engine Ing. Jorge Newbery of the Civil Institute of Space Technology ICTE.
The program includes a plan of staggered steps designed to introduce and develop the participants in the most advanced techniques of space research in an environment of high human values.

MOTIVATION: Self-propelled training vector of the amateur rocket type. Range from 500 to 1000 m. destined to the qualification and training in design, development and construction of the different mechanical, chemical and electronic stages that make up a rocket for civil use.
EDUCATIONAL VECTOR: Engine with a heterogeneous type propellant, with a range of 5 km with 1 kg of payload, intended to be applied in an intercollegiate and multidisciplinary program to promote space sciences.
ANTI-HAIL VECTOR: Development of a self-propelled vector with special safety and effectiveness characteristics to be applied to the fight against hail. The objective of this project is to install a product industrialization line and its corresponding marketing channel.
HIGH ATMOSPHERE: Double stage vector with 35 km range with 5 kg of payload intended for research in climatology and communications, as well as a flying multitasking test bench. This Project is in conjunction with the Suborbital Exploration Probe Project developed at the Power Plant.
IONOSPHERIC SOUND: Vector double stage of 100 km range with 10 kg of payload for studies of the ionosphere, ozone hole, radiation, cosmic rays, etc. The project incorporates hybrid propulsion technology.
SATELLITE CARRIER: Low altitude three-stage orbital range vector capable of injecting multi-application nano satellites into low orbits. 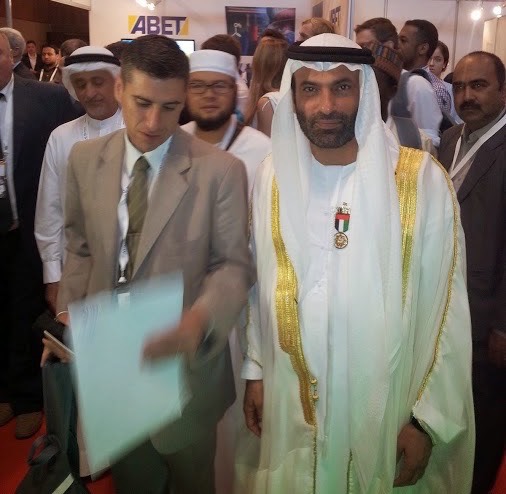 With its specificities like low-cost and long distance communications, HADUN/BLUP protocol has a wide range of applications, like